skip to main | skip to sidebar

Yes I know it has been a long long while since I posted but this is about to change. I have a photographic history of what has been done to the boat so far (including a name change) and I'll post them soon. In the next couple of weeks, weather and work permitting, the boat will be lifted and blacked before heading off to it's new luxurious mooring! More to follow... 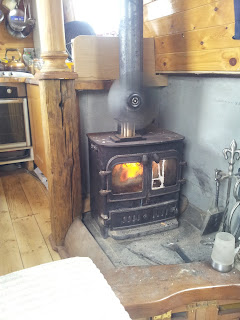 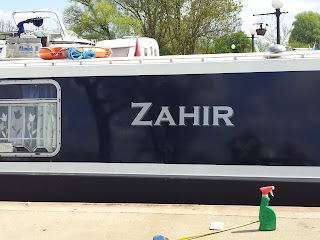 Life and all it throws up have taken their toll on the boat completion. However, loads has been done and some new pictures and an update will shortly follow. Thanks to the followers for being patient!
Posted by Paul at 02:41 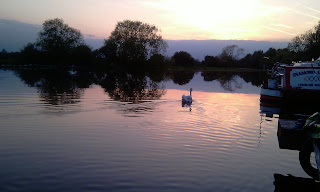 Taken from the Starboard side using my mobile phone. It's these views that convince me I have done the right thing even when I'm thinking about ripping out sections of the boat to better utilise the space.
Posted by Paul at 08:19 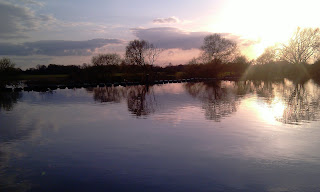 View from the bedroom window on 'Eleana'. This is such a beautiful sight every morning, especially on weekends when you have time to drink it in.
Posted by Paul at 08:17

Well it struck me today that I've gone about this in the wrong way. I should have started at the begining which is always a good thing. Anyway, the boat. I had my first narrowboat sometime ago, and bar a couple of incidents, I have to be honest and say they were happy times. Then I had a 'sensible' thought. I thought ''You're too old for this Paul. Get back on land!'' So I did. What a mistake. I knew the moment I agreed the sale it was the wrong thing to do. Hundreds of hours of work gone in a handshake. So I moved back onto dry land and felt disorientated for the first 6 months. This was put down to the non-movement of the house. Nomatter what anyone says, even narrowboats move gently. On top of that there were the months of shattered sleep. I could not for the life of me get a decent nights sleep on land. See, its the boat movement gently rocking you off to sleep. It's only slight but the effect is there. So after a couple of years I decided I wanted another narrowboat....and here we are,at the begining, where I should of started in the first place.
So I trawled all the usual magazines and sites for ages and ages. I asked people if they knew of any boats for sale, and this side of my search plan was based on that old thing that people say after you aquire something. You know it. ''If only you said. Charlie was trying to sell his for ages and gave it away in the end.'' Well you guessed it. Charlie wasn't in the market to sell anything at the time. So it was auction site time. Evilbay was searched and searched and the watched list grew longer and longer with boats seemingly fetching sums that would embarass a Columbian drug cartel or even a footballer. Eventually I saw one. This little thing had had thousands spent on it. The then owner had run out of time and money so what was effectively a new painted, insulated shell was available for what seemed to be reasonable money. So I watched, and I watched until the last few minutes and a sum of cash the size of a developing country's national debt was bid. I had lost it. Still there would be others. And there were. Boats fitted out with full size sofas and huge domestic fridge freezers were 10-a-penny. I went and looked at boats that were denying the laws of physics just by floating. I kept trawling Evilbay and one day, the boat I had missed was relisted. Wasteing no time I contacted the vendor to arrange a meeting. I travelled to Lichfield to view and wasn't disappointed. The boat was exactly as described. After much haggling a price was agreed and the boat was mine. And that is the start of the saga in some sketchy detail but nonetheless documented.
Posted by Paul at 08:46

The boat is named. 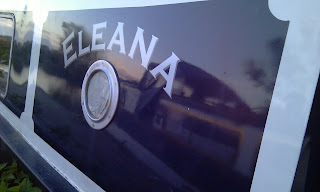 The boat gets ballast and a floor.

Well I started this in December 2009 and seemed to struggle a bit. Having been diagnosed as Bipolar with traces of SAD, winter can take its toll. I don't mind the cold, it's the constant grey and the short short days and long nights. Anyway, once the floods has passed, the process of fitting out began. The plank floor was put down after the ballast in the form of broken slabs. Here's my first tip. Visit your local builders merchant and ask about broken slabs. They can't sell them and generally pay to have them removed. Speak to them nicely, buy the coffees and you never know! With the flooring down and screwed to the batton bearers, the boat suddenly looked less daunting then before. This is a really important job. Get it done as quickly as possible. You'll feel you've achieved something which is really important as you have a very long way to go still. I enhanced this 'feel-good' factor several fold by lighting the woodburner and burning off-cuts. Nothing matches the smell of a woodfire, and with an old copper kettle constantly on the boil for tea and the sun streaming in through the windows life is suddenly very very good. I'll start posting photos soon. Cheers!
Posted by Paul at 03:04